Bell Acres man: ‘I don’t even look at myself as I’m (transgender)’


Athena Heath worries about how others will treat her son.

She knows not everybody is accepting. It's taken her time to understand and accept that her middle child — Carter James Heath, 20 — is a transgender man. 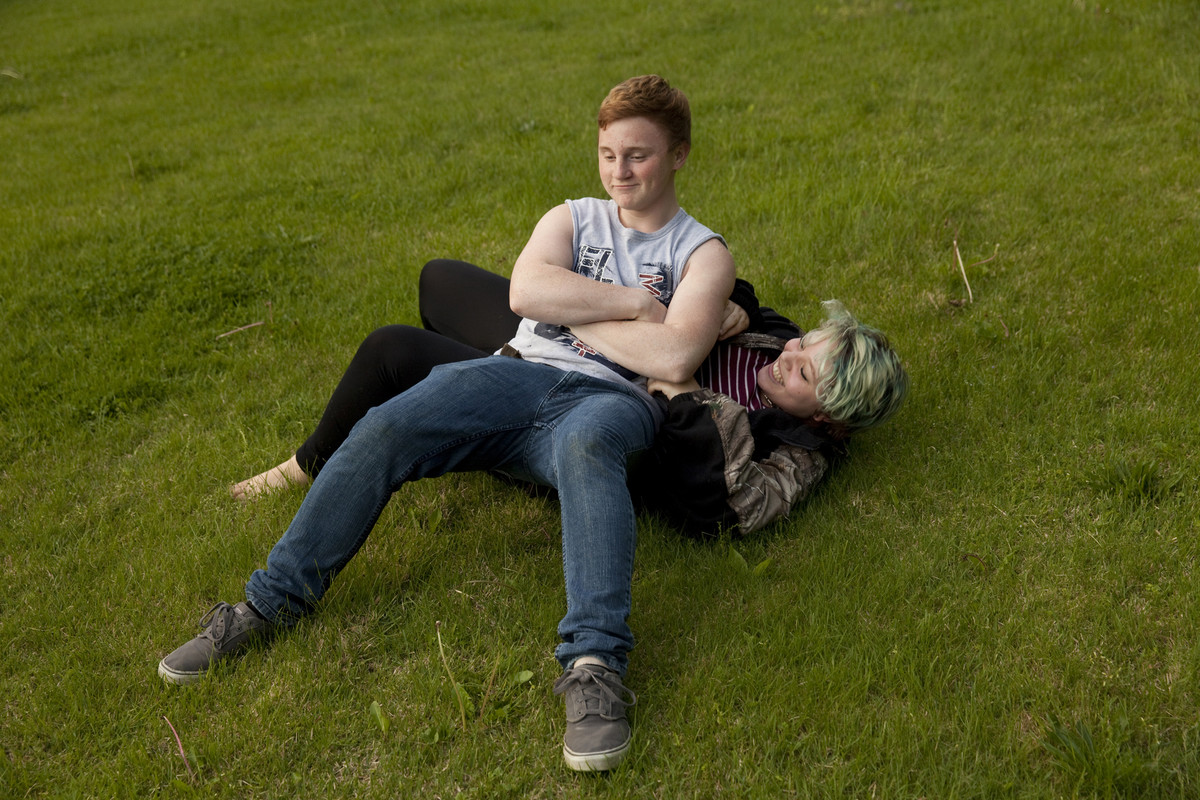 After wrestling in the yard with friend Sky Bignall, C.J. triumphantly sits on top of her during a shared birthday party for C.J., who turned 19, and younger brother, Nathan, at their Bell Acres home Friday, May 13, 2016. C.J. , who has struggled with anxiety attacks and dysphoria, credits good friends like Sky for helping him through his transition.

C.J., as he is known, was designated as female at birth.

"Some have said, 'He can live his life and still be happy. Why does he have to go through surgeries and go through all of that?' In a way, I can understand, but at the same time, just be who you want to be," Athena Heath, 52, said. "After you give birth to a child and you go through all of that, that's the hard part. There's times that I feel he doesn't want to accept that mom's actually trying. But it's difficult.

"Yes, I asked God for my strawberry blond, green-eyed little girl. I had (C.J.'s birth name — Cassandra Lynn) picked out ever since I was 16." 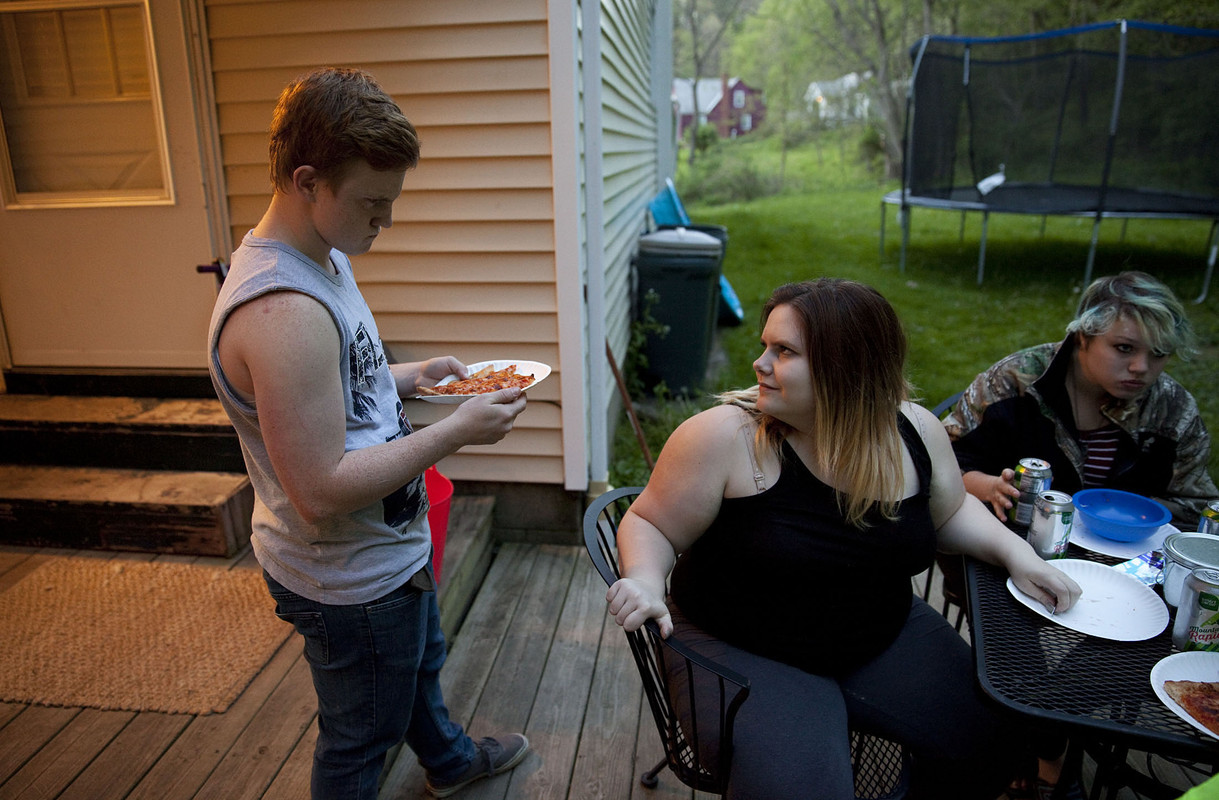 C.J. has a staring contest with his girlfriend at the time as they and friends eat pizza during a shared birthday party for C.J. and his younger brother, Nathan, at their Bell Acres home on Friday, May 13, 2016. In high school, C.J. wrote his mother a letter to tell her he was gay. She embraced that, but later had trouble accepting the fact that C.J. actually was transgender.

But over the last several years, Athena Heath and C.J. Heath, both of whom live in Bell Acres, have grown and understood each other. 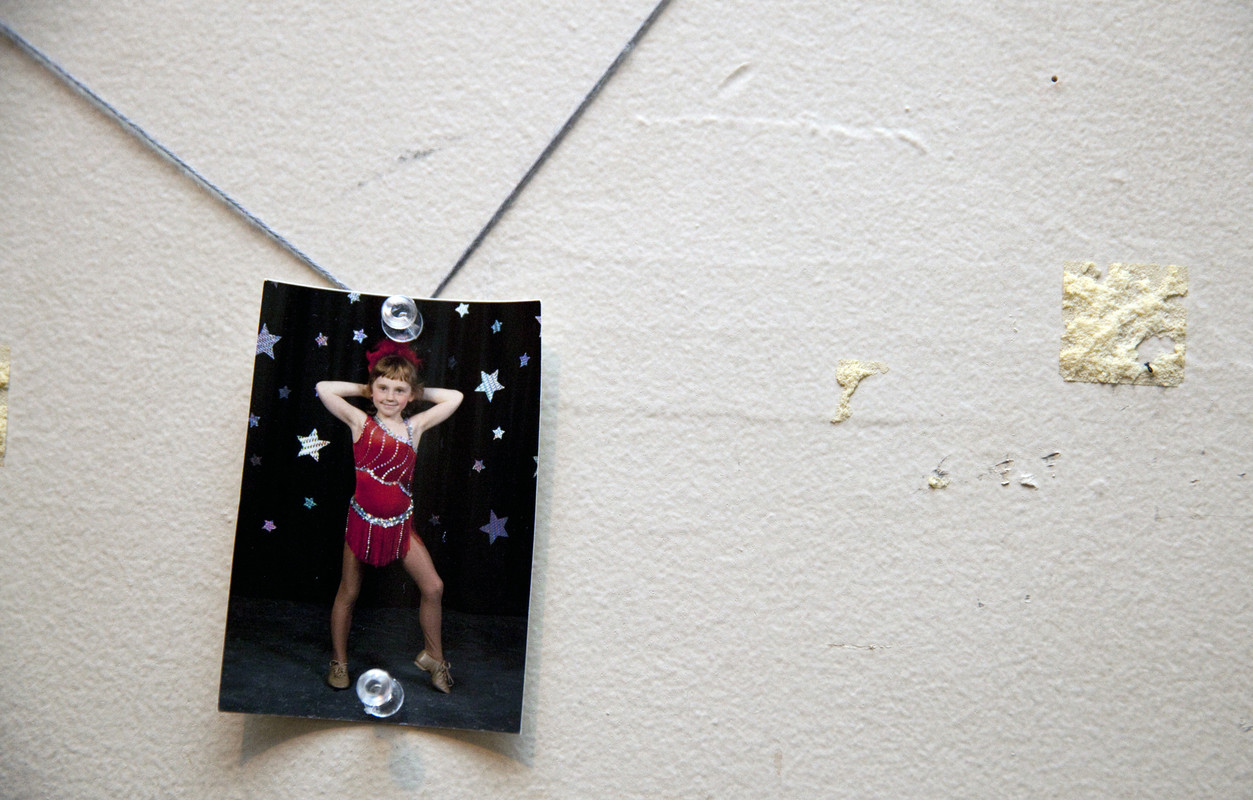 A photo of C.J. as a young dancer is tacked to his bedroom wall at his mother's Bell Acres apartment where he was living at the time as part of a timeline showing the progression of his gender identity. As he talked about the timeline on Sunday, Feb. 14, 2016, he said he remembered feeling awkward in his body even at a young age. C.J. began hormone therapy in November 2015.

"I was excited and nervous at the same time," C.J. Heath said of having completed the surgery.

His last surgery follow-up visit was a milestone, he said.

"I told the doctor, 'You mean I don't have to (empty the drains) anymore? I can do whatever lifting I want. I can go out and swim,' " he said. "Once I was cleared, I thought, 'that's awesome.' " 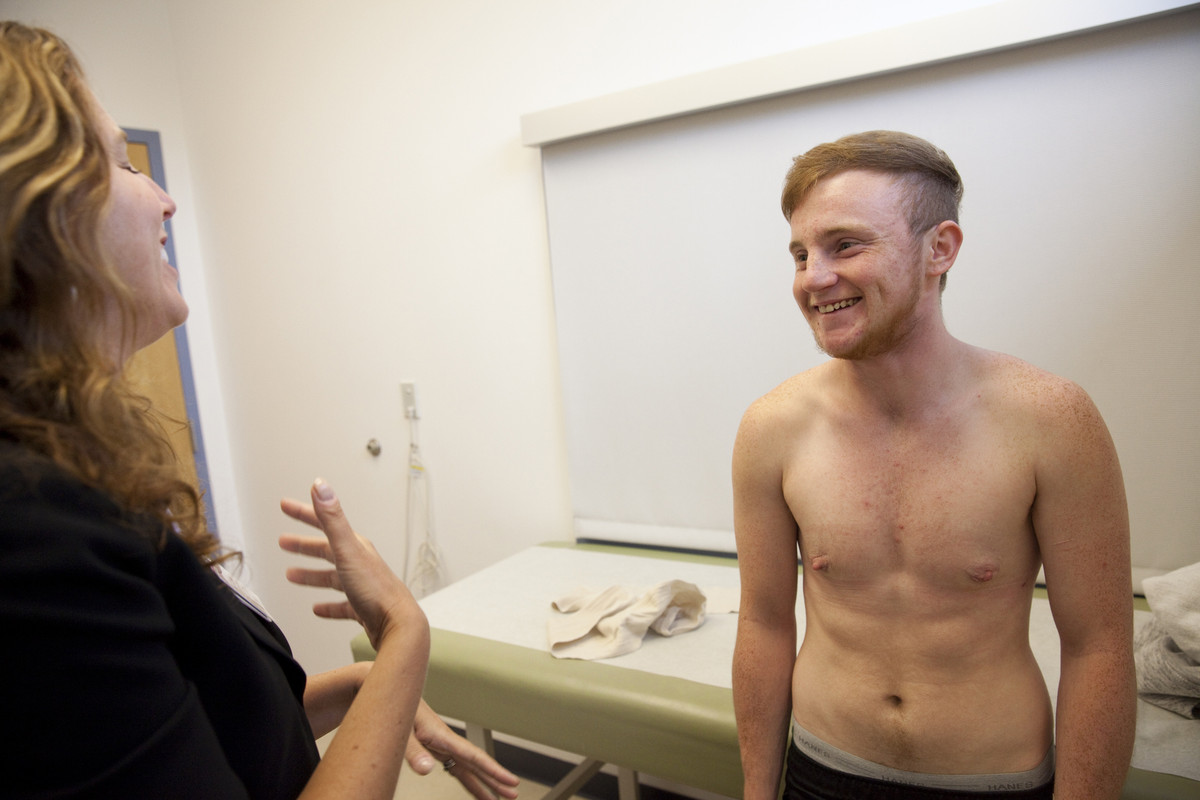 Dr. Lorelei Grunwaldt shares a laughs with C.J. during an appointment following a gender-reassignment surgery for chest reconstruction at Children's North in Franklin Park on Monday, Aug. 21, 2017. C.J. was nervous that the doctor would tell him the wounds would need drained, but everything looked normal, she said. The procedure was covered by insurance.

For C.J. Heath, a goal to be shirtless at the beach this summer was a priority.

"I just wanted to get out and be in public," he said. "I was swimming shirtless this year. It's been really relieving knowing I don't have to worry about that anymore." 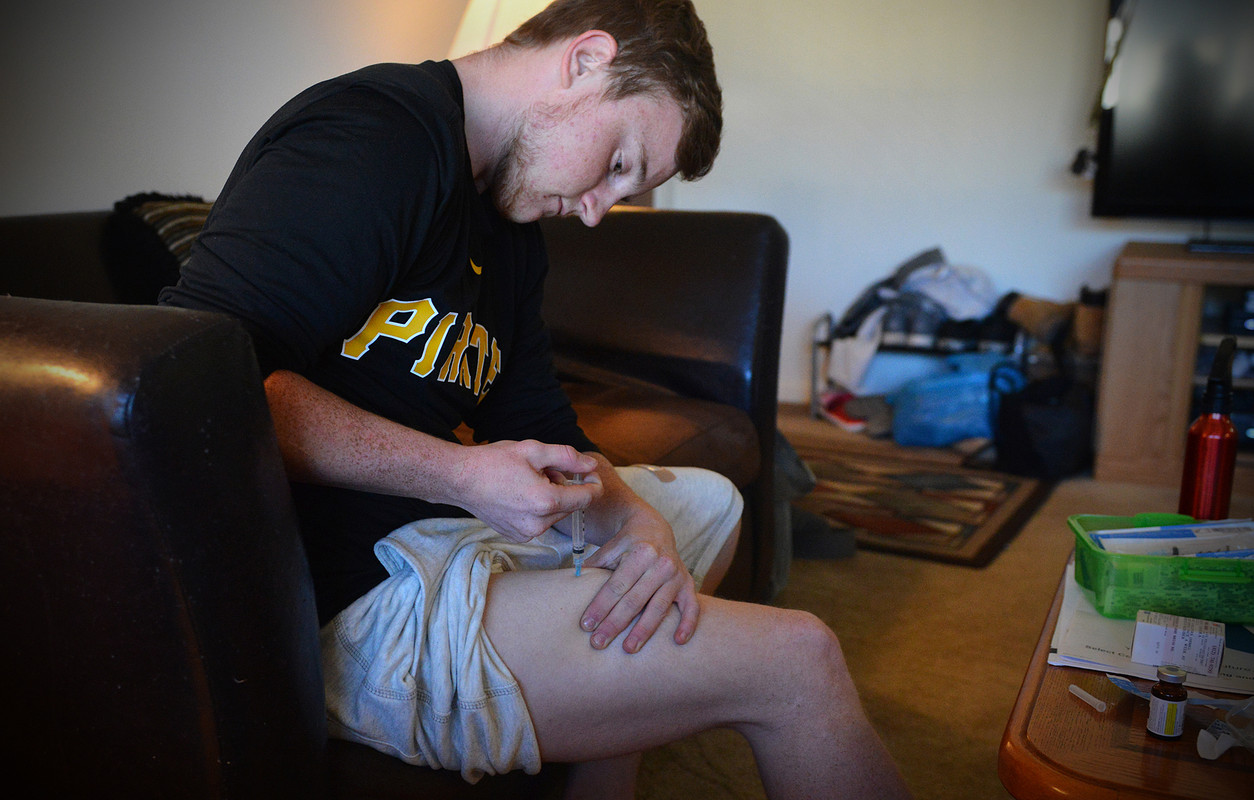 Though not a huge fan of needles, C.J. opted to do weekly shots of testosterone instead of using a patch or taking pills because he felt the injections were more effective. His current dosage is the maximum he'll be on and will need to take it for the rest of his life.

Photos throughout his life displayed on a wall in a bedroom of his mother's apartment, where he once lived, showed C.J. Heath's transition.

To him, it was a "self-esteem booster."

"Seeing how much I've changed — even if it might not have looked like a big change, physically it really was," he said. "There was always a person inside me — I always wanted to go play football." 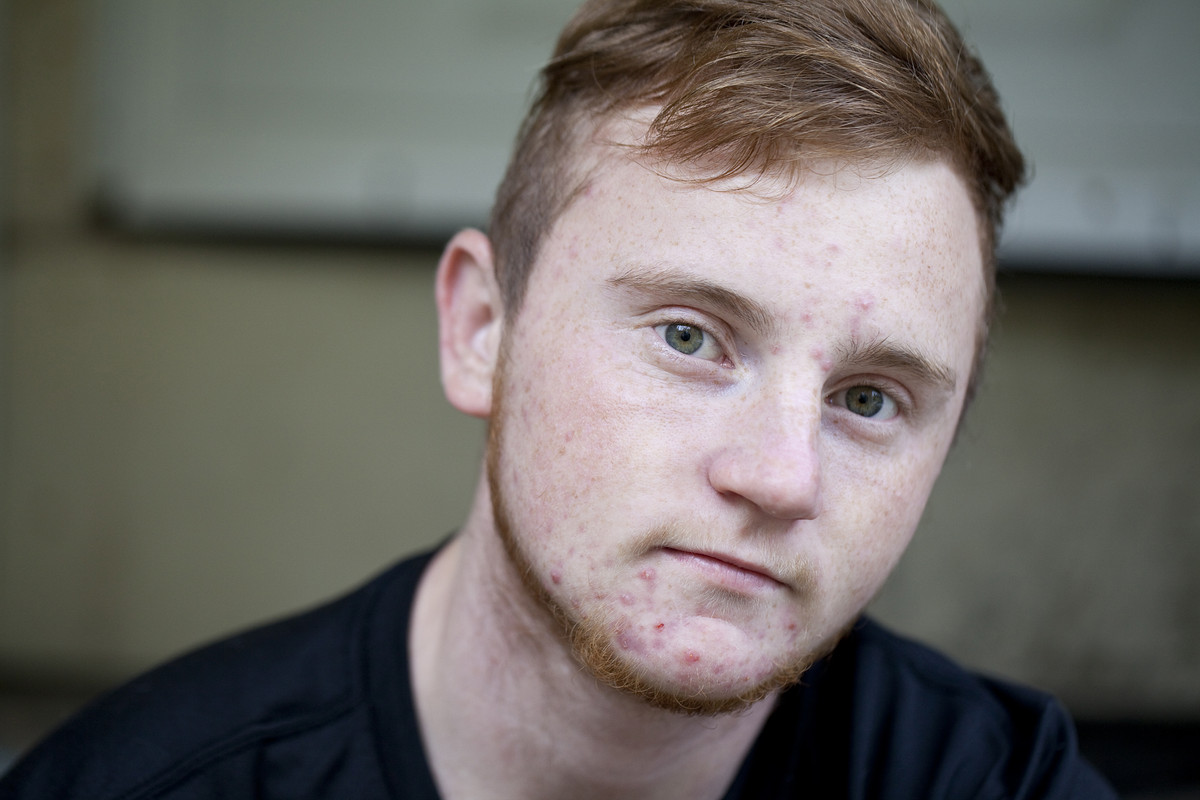 "I don't even look at myself as I'm trans. I don't look at myself any differently. When it comes to flirting with girls, I feel they don't need to know unless it could actually go somewhere other than flirting," he said.

C.J. Heath said he's come a long way emotionally since first scribbling a note to a therapist saying he identified as being transgender.

Occasionally, C.J. will run into someone he recognizes from Quaker Valley High School, where he graduated in 2015. 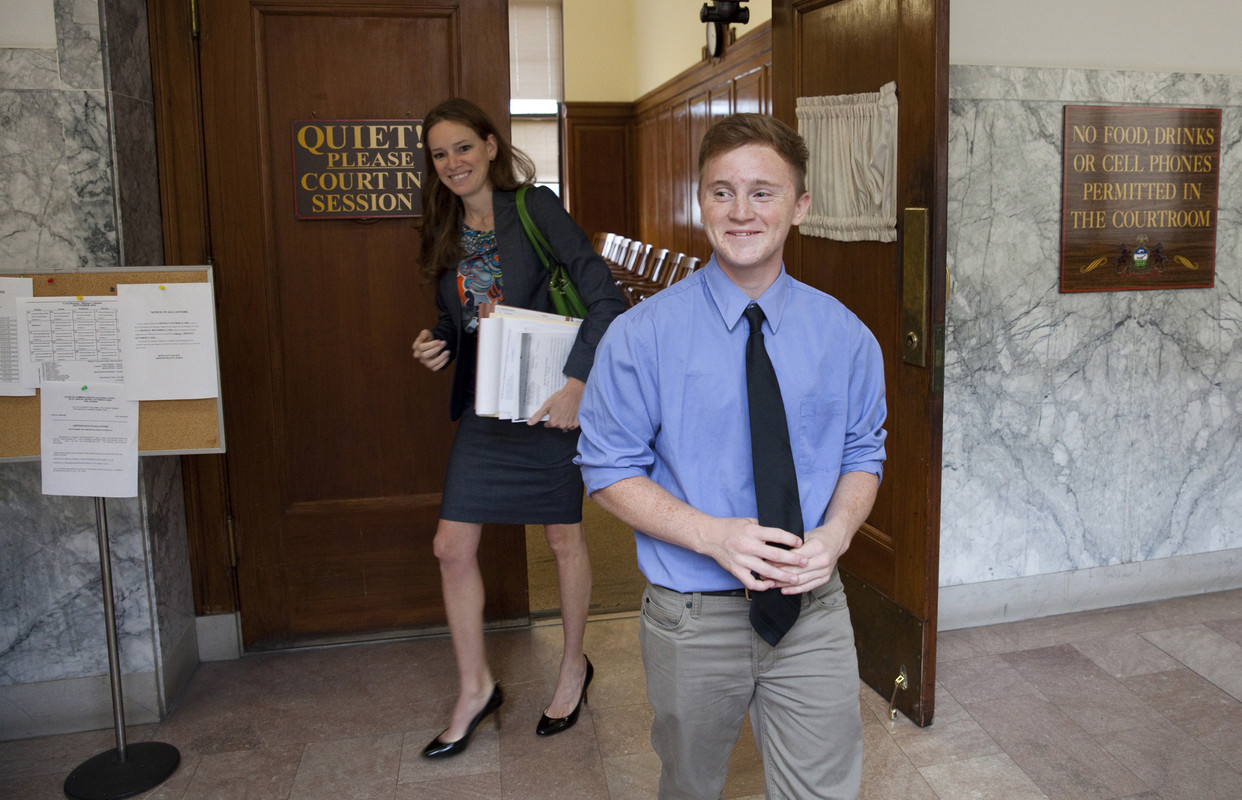 With his lawyer behind him, C.J. smiles as he exits a courtroom following a name change hearing where a judge granted him permission to legally change his name from Cassandra Lynn to Carter James at the Pittsburgh City-County Building on Friday, Sept. 9, 2016.

Social networking app Tumblr has helped him communicate with others who identify as transgender.

C.J. Heath, whose work life has ebbed since graduating from Quaker Valley, said he didn't want to explain to co-workers he is transgender.

"Because they're going to look at you different in every thing you do, whether you want them to or not. It's always in the back of their head," he said. "If they know I'm a good worker and they know I'm capable, they're not going to sit there and say something to me.

"I can sit there and talk about my life like there wasn't a transition at all. Unless someone is listening in detail to every story I tell, they're not going to pinpoint anything. There's never really a story I told them that they could've guessed otherwise." 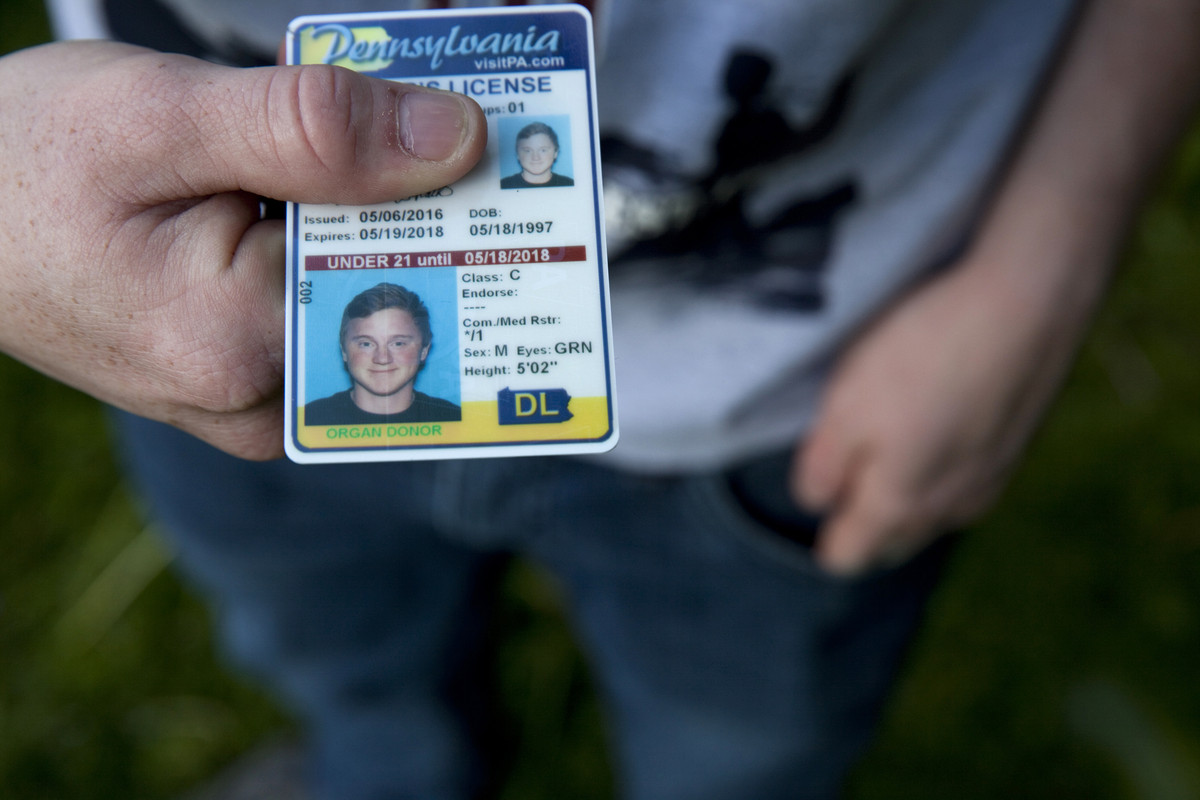 C.J. Heath holds his license showing the change in gender marker Friday, May 13, 2016. In Pennsylvania, those wishing to change their gender marker on their license must complete an application that has to be signed by a medical or social service provider.

Athena Heath said she worries current or future employers would fire him for being transgender. 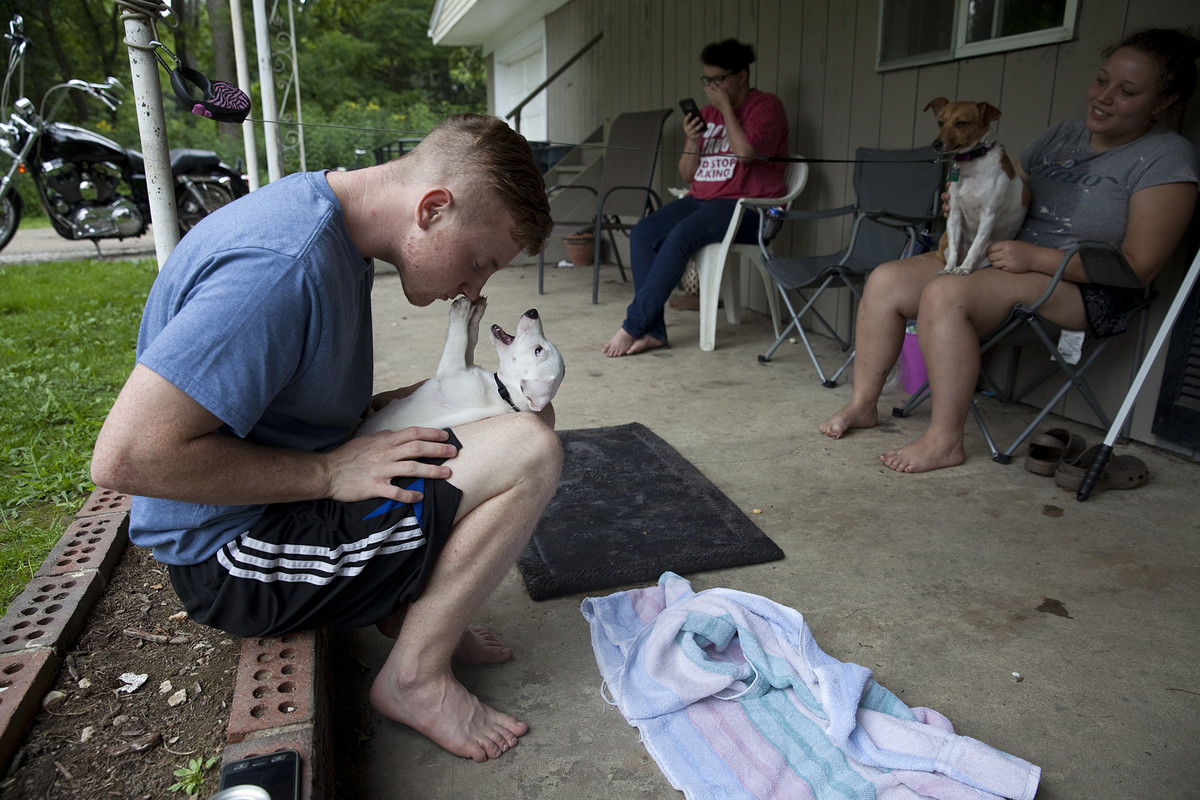 C.J. plays with his new Jack Russell puppy, Charlie ,as he sits on his front porch with friends and other dog, Isabelle, on Friday, July 28, 2017.

At a technical school he attended following high school, C.J. Heath said he faced harassment from classmates who judged his appearance.

Because of that experience, he wouldn't use the restroom in between classes and instead would wait until class, asking his teacher to be excused.

"It would take me 10 minutes to get to the bathroom because I would listen to see if I heard somebody in there," he said. "If someone was in there, I'd walk to another bathroom." 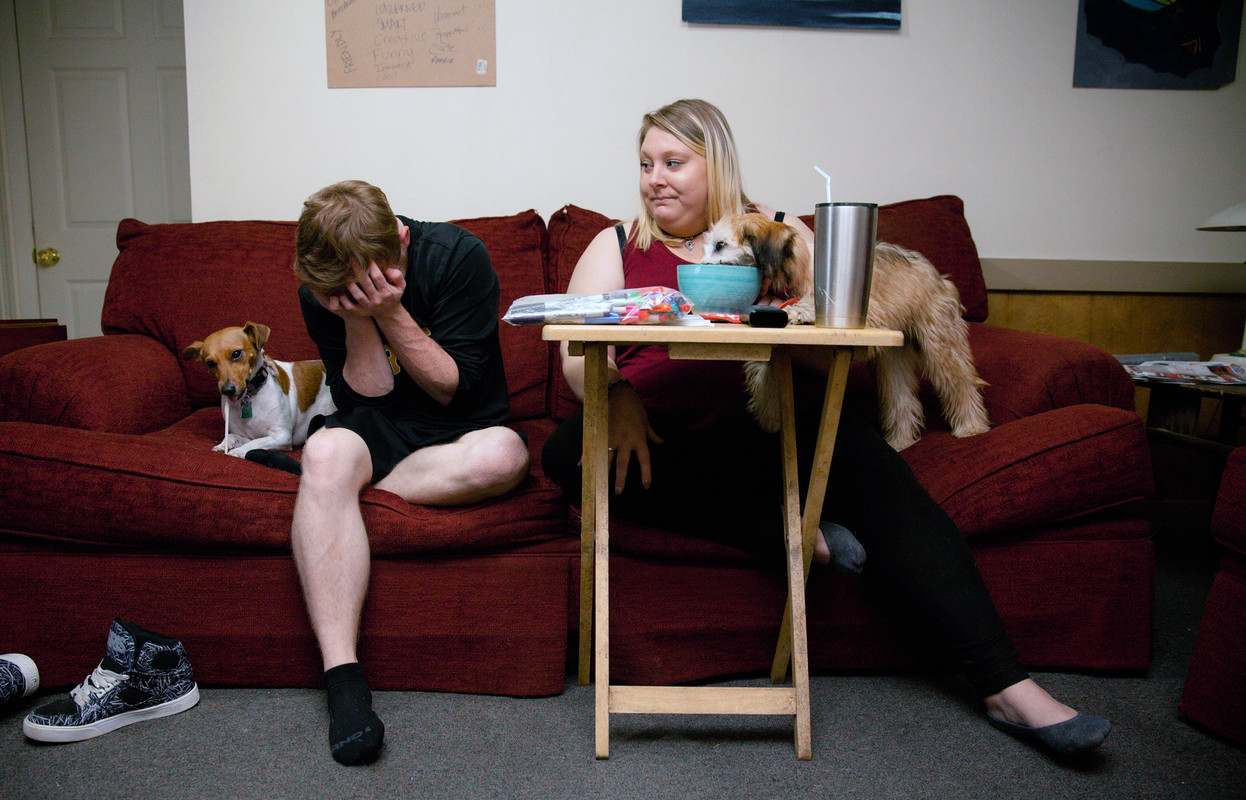 Girlfriend Olivia Work makes a face as C.J. laughs about their dog, Nala, licking clean her bowl of ramen noodles while dog, Isabelle, contently gnaws on a rawhide stick at their Bell Acres apartment Wednesday, Oct. 4, 2017.

While C.J. Heath said many people throughout his life have been accepting, some family members and others have not. 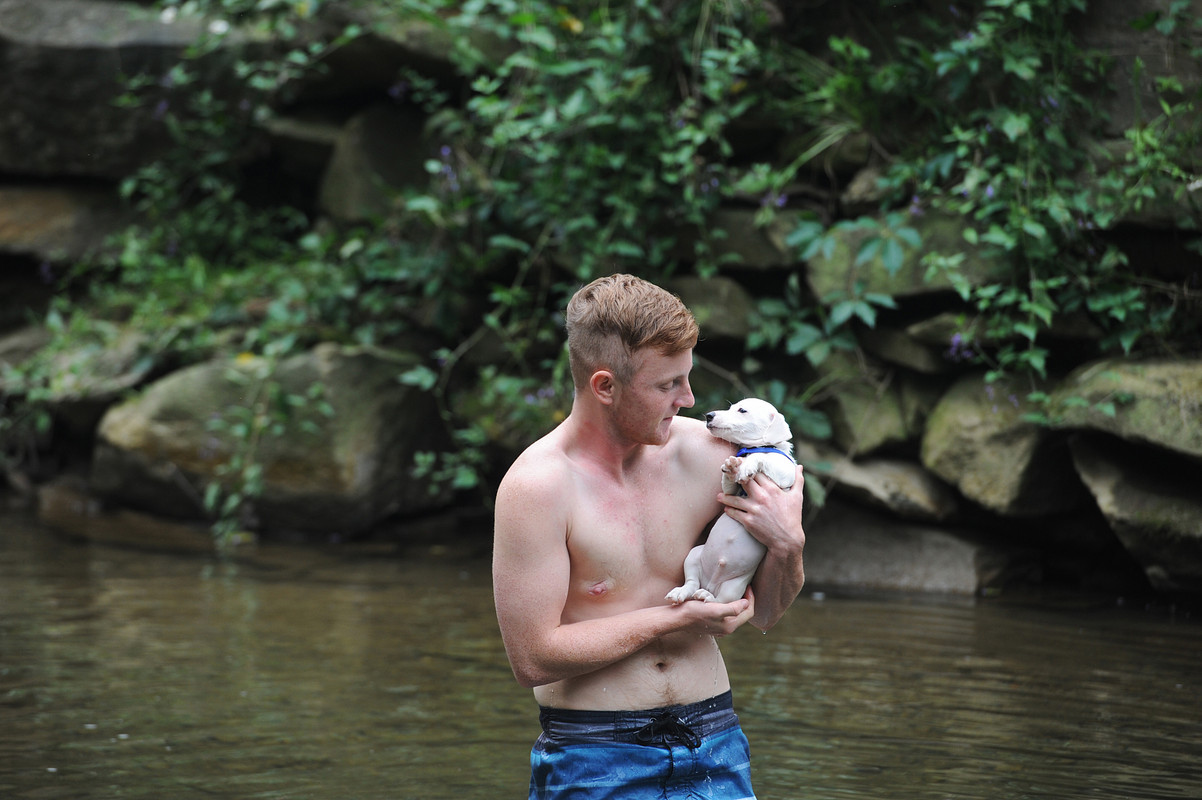 C.J. said he's in a happier place than he's been in for years. He again has a job and a live-in girlfriend, and he accomplished this summer one of his ultimate goals—to be able to go swimming shirtless. "I just really wanted to get out and be in public," he said, adding that he was nervous stepping out onto the beach for the first time without a top on. "It's been really relieving knowing I don't have to worry about that anymore."